Beò’s songs are full of pain, loss and heartbreak. Her music transcends genres and focuses instead on exploring the human condition
Beò’s built her entire career by herself through networking, competitions, hard work and dedication
She’s performed on CBS LA TV and had her music featured on hit US TV shows Pretty Little Liars, Famous in Love and the 2022 Paramount film The In Between

Anna Pancaldi’s voice speaks straight to your soul. It’s rich, textured and full of color, and it can switch from dark to light in a nanosecond. When paired with her melancholic, pensive lyrics, her music taps into emotions we often steer away from but are an integral part of the human experience nonetheless.

On Artlist, Anna releases her music under Beò. Her tracks are often used in films to depict heartbreak, loss, pain and suffering, but Anna says she didn’t choose to make music this way. That’s just what comes out. “I started writing really emo stuff when I moved to South Africa with my family when I was 12. I had this tiny guitar, and I’d write these sad songs on the beach feeling really sorry for myself.”

Anna was born in Essex in the UK. Her dad was a singer and would belt out Barbara Streisand, Whitney Houston and Mariah Carey around the house, and Anna loved joining in. But just before the family moved to South Africa, Anna had an experience that took years to overcome. It happened after her primary school singing teacher suggested she enter competitions. Anna remembers walking on stage, singing the opening lines of “Edelweiss,” freezing and then bursting into tears. “It must have been quite awkward for the audience,” she laughs. “But there must have been something about the competitive element that didn’t sit well with me.”

“As an artist, I need to stay genuine, and with music, I can express what I struggle to share in conversation.”

Anna says it took years for her to get back on a stage. But the move to South Africa helped rebuild her confidence, and by the time she was 15, she was able to perform in her school productions. “But that experience took up much of my younger journey in music.” However, despite not performing during her fledgling years, she was writing a lot of her own music. And by the time they moved back to the UK when Anna was 16, she had a decent understanding of the art of songwriting. When she turned 18, Anna went to music college for a couple of years but dropped out when she realized it was very academic and there wasn’t much songwriting involved. 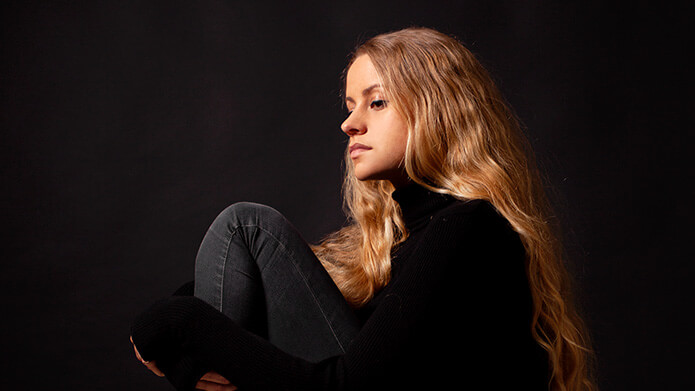 So she sold her car, packed a bag, took her tiny guitar and hopped on a plane to Nepal. “I wanted to be in the thick of it, writing, honing my craft and learning how to perform to people.” She traveled around the world, immersing herself in different cultures and singing at every open mic night she came across. She hit South East Asia, New Zealand, Australia and South America. The ever-changing surroundings and constant stimulation caused an outpouring of music, and she found herself writing the melancholic, raw and honest music she’s known for today.

“I’m a very upbeat person,” Anna says almost defiantly. “But I don’t write all these happy, clappy songs. As an artist, I need to stay genuine, and with music, I can express what I struggle to share in conversation.” Anna says many of her songs are about loss, but she writes lyrics in a way that makes them universally accessible, so every person can apply their own experiences.

“From the very beginning working with Artlist, I was met with such warmth. I could tell they valued my time and creativity, and I really appreciate that they pay fairly.”

When Anna returned from traveling, she moved to London and began building connections in music. She attended networking events and started strategizing her career. It wasn’t an option not to pursue music – Anna had so much to say, her compulsion to write bordered on spiritual. “I read somewhere that songwriting is like a conduit to some other magic. Sometimes it’s this strange out-of-body experience, and you don’t really know where it comes from. It just flows out, and you can’t explain it.”

Being featured on TV

Moving to London in 2012, Anna has gone from networking events and open mic nights to winning a Radio One competition and playing the 02 Academy alongside Rita Ora and Mystery Jets. That blew her world wide open, and she started playing shows in the UK and across Europe. Anna’s friendly, warm personality meant she made connections easily, and people were keen to introduce her to their contacts in the industry. So she went on tour with Fatai, David Ryan Harris (John Mayer’s guitarist) and Jake Isaac, who’s signed to Elton John’s label. Then Anna went to the US to work her magic in the same way she did in Europe.

“I went to America and played a ton of open mic nights and other little shows. It was a really fun trip, and when I got back, I got a manager.”

That crazy moment when you’re song is used in @PLLonMax 🤯

Little but creepy that I’m there in the corner, but I was desperate to make the scene. streaming on @BBCiPlayer @FreeformTV now… without me.

From music studios… to TV! 🥰

“I think success is about celebrating the wins and enjoying what you worked for. And I feel fortunate that I got to make my hobby my job.”

Since teaming up with her manager, Anna’s songwriting skills caught the attention of US TV shows Pretty Little Liars and Famous in Love, as well as the 2022 Paramount+ film The In Between. Anna’s had 3 top-10 tracks on the singer/songwriter iTunes charts and performed on CBS LA TV. She’s also soundtracked a Levi’s campaign and been featured in a range of Spotify playlists. These include New Music Friday and The Most Beautiful Songs in the World. Over the course of her career, Anna has accumulated over 2.5 million streams and received support from Radio 1, 2, 6 and BBC Introducing. So it’s fair to say her stage fright has well and truly dissipated.

And here’s the moment!! That mad moment my song got used in the new @paramountplus movie, The In Between with @JoeyKing (also streaming on @netflix ) 🤯🤯🤯 #happy #singersongwriter #musicinfilm #womeninmusic pic.twitter.com/9YH4tjkFkU

Anna first teamed up with Artlist Original in 2021. “From the very beginning working with Artlist, I was met with such warmth. I could tell they valued my time and creativity, and I really appreciate that they pay fairly.”

Under Beò, Anna has written “This Life of Time” alongside Sémø for Artlist. It sits somewhere between pop and cinematic, with lyrics about loss and longing and an orchestra adding epic textures and weight.

License “This Life of Time” now

Her latest track is called “Only For You” and was written in collaboration with her good friend and producer, One Hour North. It’s an acoustic pop ballad exploring themes of love, connection and heartbreak.

License “Only For You” now

Anna and One Hour North recently teamed up to create To The Valley, an indie-folk project which allows Anna to explore her upbeat side. Their track “We’ll Keep Running” is choc-full of mandolin, ukulele and uplifting whistles and sounds a lot like sunshine.

Her dream is to continue doing music full-time. Anna’s currently working on a new album and collaborating with artists such as Besomorph, N3WPORT, Low:r and Curtis Walsh. She’d love to tour the US again, as live performance is her lifeblood, but she also plans to go with the flow without trying to predict the ever-evolving nature of a life in music. “I think success is about celebrating the wins and enjoying what you worked for. And I feel fortunate that I got to make my hobby my job.”

Check out Beò’s page on Artlist.

Alice Austin is a freelance writer from London. She writes for Mixmag, Beatportal, Huck, Dummy, Electronic Beats, Red Bulletin and more. She likes to explore youth and sub-culture through the lens of music, a vocation that has led her around the world. You can contact and/or follow her on Twitter and Instagram.

More from this author

Find the perfect
song for your video

Music Talk: A Glimpse Into the Funky, Upbeat World of Zach Sorgen

Music talk: Omri Smadar Is on a Mission to Hypnotize the Masses

Launching AI-Powered ‘For You’ Recommendations

Music talk: Omri Smadar Is on a Mission to Hypnotize the Masses

6 Ways to Earn Passive Income as a Video Creator